The Taboo of Mental Illness 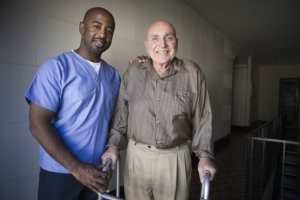 We whisper about mental illness. Is it dementia, senility, Alzheimer’s or something else? Some people yell about it.
Here’s a story that might sound familiar:
He wanted to go home after half an hour. His wife wanted to stay and enjoy the party. She tried to convince him to stay. So, he slammed his walker on the floor and shouted that he was going to call the police. His agitation grew to such heights that the father of the bride asked that he be removed from the house. They went home.
“I’m not crazy. You are!” he barked at his wife.

We won’t know what is causing his turbulence until he sees a neurologist or psychiatrist because there are many types of mental illnesses.

According to the National Institute of Mental Health, about 25% of American adults (those ages 18 and older) and about 13% of American children (those ages 8 to 15) are diagnosed with a mental disorder during a given year.

There is Post Traumatic Stress Disorder. Many veterans suffer from PTSD after experiencing the horrors of war. Yet war is not the only cause. It could have been a sexual assault, a traffic accident, terrorist attacks, an unexpected severe injury, the death of a loved one, wild fires, natural disasters such as hurricanes, earthquakes, tsunamis. These are some, but not all of the causes. People do live and survive PTSD. They learn to deal with the disturbing memories of the past.

Anxiety disorders are characterized by worry, anxiety or fear that disrupt one’s daily activities. They stem from a combination of things, including changes in your brain and environmental stress, and even your genes. The disorders can run in families and could be linked to faulty circuits in the brain that control fear and other emotions.

Then there is Attention-Deficit/Hyperactivity Disorder, which usually occurs in children but can affect adults as well. It manifests as an inability to “sit still and pay attention.” It causes hyper activity and impulsiveness. Adults may never remember to close cabinet doors and need to stand up and move around every few minutes. ADHD tends to run in families and is often genetic, but it could be caused by brain injury or environmental factors such as lead exposure.

People with obsessive compulsive disorders are the worrywarts of life. Moreover, they have repetitive thoughts that induce repetitive behavior.

Depressive disorders come in various intensities, but the symptoms are sadness, lack of interest in daily activities and things one used to enjoy. Depression is more common than we think. There are several factors that can increase the risk of developing the condition. A combination of genes and stress can affect brain chemistry and reduce the ability to maintain mood stability. Changes in the balance of hormones (as in post-partum depression) might also contribute. Certain medical conditions, such as cancer or hypothyroidism and some medications including steroids, can also cause depression.

Bipolar disorder is associated with mood swings ranging from deep depression to manic highs. One might enthusiastically begin to paint the large bedroom, get three quarters of the way through, and then sink into low energy and sadness.

Dementia is a group of symptoms that include decline in memory and other thinking skills often severe enough to interfere with day to day living. Vascular dementia can be caused by a stroke, thyroid problems or vitamin deficiency according to the Alzheimer’s Association. Interestingly, senility or “senile dementia” are generally regarded as a part of aging. It is not. Serious mental decline is not a normal part of aging. Many elderly people never have any cognitive impairment whatsoever.

The cause of most mental illnesses has not been found. Research suggests that factors such as genetic, biological, psychological and environmental can cause mental illness. People don’t just “snap out of it.” Nor is it a character defect, or weakness.

Mental illness is often misunderstood, only whispered about and has derogatory connotations.
Yet it can affect any age, ethnicity, income or educational level. The good news is that most mental illnesses are treatable. People can and do live, work, love and function with mental illness.

This entry was posted in Uncategorized. Bookmark the permalink.